Riding for a Cause: Motorcyclist Names Band of Blue as Charity in Hoka Hey Challenge

Many hear the call, but only a few are chosen.

The mantra of the Hoka Hey Motorcycle Challenge is one that, as law enforcement professionals ourselves, we can fully understand. While many may hear the calling to serve their communities, only a few brave men and women leave their families every day to put their lives on the thin blue line.

The Hoka Hey Motorcycle Challenge began as a celebration of the Lakota Sioux warrior spirit and has a mission to raise awareness for social issues while giving riders an opportunity to test their fortitude and determination. In 2020, the event raised over $500,000 for nonprofit organizations across the nation.

We spoke with Dustyn Monismith who has pledged to complete this 10,000 mile journey in the name of Band of Blue.

Dustyn Monismith bleeds motor oil. An avid outdoorsman, he is looking forward to a chance at grabbing life by the handlebars and taking part in the ultimate test of strength, endurance, and sheer will power.

He comes from a long line of motorcyclists, too. His father and grandfather were both adventurers of the open road, and Monismith began riding at just fifteen years old. Today, he is a technician for Harley-Davidson Motor Company. He and his wife, Brenda, are also instructors for the Harley-Davidson Riding Academy. Originally from Pennsylvania, Dustyn has lived in Mukwonago, Wisconsin for the past seven and a half years until recently moving to Georgia with his family.

Dustyn heard about the Hoka Hey Challenge from his brother-in-law who completed the ride last year to raise money for homeless veterans. 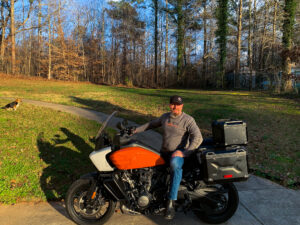 Why Band of Blue?

When asked why he chose Band of Blue as his charity, Dustyn stated that when he worked at dealerships prior to coming to Harley-Davidson, he serviced many Milwaukee Police Department and Waukesha Sheriff’s Department motorcycles. “Police put their lives on the line for us,” he said, “so it’s important to give back.”

To date, Dustyn’s longest ride stretched from Wisconsin to Georgia—an 800-mile trek he completed in sixteen hours, noting that the weather slowed him down a bit. The Hoka Hey Motorcycle Challenge will test Dustyn’s willpower and endurance with 10,000 miles of open road.

“There’s no time limit,” explained Dustyn, “but you can’t finish any sooner than ten days.” He went on to share that the majority of riders complete the journey in a window of fourteen to twenty-one days.

The Hoka Hey Challenge is not for the faint of heart. People drop out for any number of reasons, most commonly due to mechanical issues or being unable to withstand the elements. “You don’t know exactly where you’re going or where you’re going to sleep at night,” Dustyn stated. “So, your motorcycle has to be outfitted for extreme conditions. For example, during last year’s ride it got down to the low thirties, so riders had to have tents, sleeping bags, and that kind of survival equipment.”

The motorcycle that Dustyn will ride is a Pan America™ 1250 Special Bike by Harley-Davidson. Designed for utility and rooted in the spirit of iconic American off-road vehicles, this model is engineered for adventure. The bike will be outfitted with a GPS tracker, so supporters can follow Dustyn’s progress.

The money that Dustyn raises through this challenge will go directly to Band of Blue to further our mission of creating transformative experiences for families of fallen officers. These experiences have the power to uplift, bring hope, and ultimately prove that in the wake of tragedy, children and spouses of fallen heroes can find a reason to smile again. Your donation makes a difference. Donate with the button below, and help Dustyn support families of fallen officers with the ride of a lifetime.

Thank You to Dustyn Monismith for choosing Band of Blue as his charity. Be sure to follow Band of Blue and Hoka Hey Challenge on Facebook to stay up to date with the latest news and events.